Adam Reid is the acclaimed chef-patron of The French in the historic Midland Hotel in Manchester. Adam is no stranger to cooking beautifully
presented plates of food. He cooked the main course for the Great British Menu 2019 banquet with his winning dish ‘Comfort Food Sounds Good’. His dessert ‘Golden Empire’, also made it through to the Great British Menu banquet in 2016.

Derived from the Lancashire staple of cheese and onion pie this dish aims to have the wholesome flavours of the northern classic and enhanced with the warming herbaceous notes of lovage cut through with the sweet sour of the pickled veg salad. We use vegetables such as beetroot and radish and lighten the whole thing with the endive lettuce. The pie is topped with a
crisp of potato made by shredding potato finely, coating in butter and baking. The crack adds another texture dimension.

Plate selection
The plate was designed to give centre stage to the pie. There is no rim so your eyeline is not obscured and the surface is flat and untextured so as to act as a ‘pedestal’ for the centrepiece.

Pie
A fine shortcrust pie case is filled with a thin layer of onion jam then a Kirkham’s cheese and lovage Custard which is baked to set.

Powder
Lovage powder is dusted over the surface for an intensely herby flavour.

Salad
A salad of pickled beetroot, radish, celery, spring onion and endive lettuce is mixed with a simple vinaigrette and placed neatly on top of the pie.

Crisp
The dish is finished with a fine potato crisp the same size as the pie. 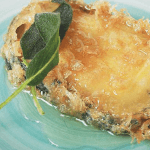 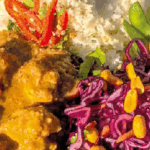